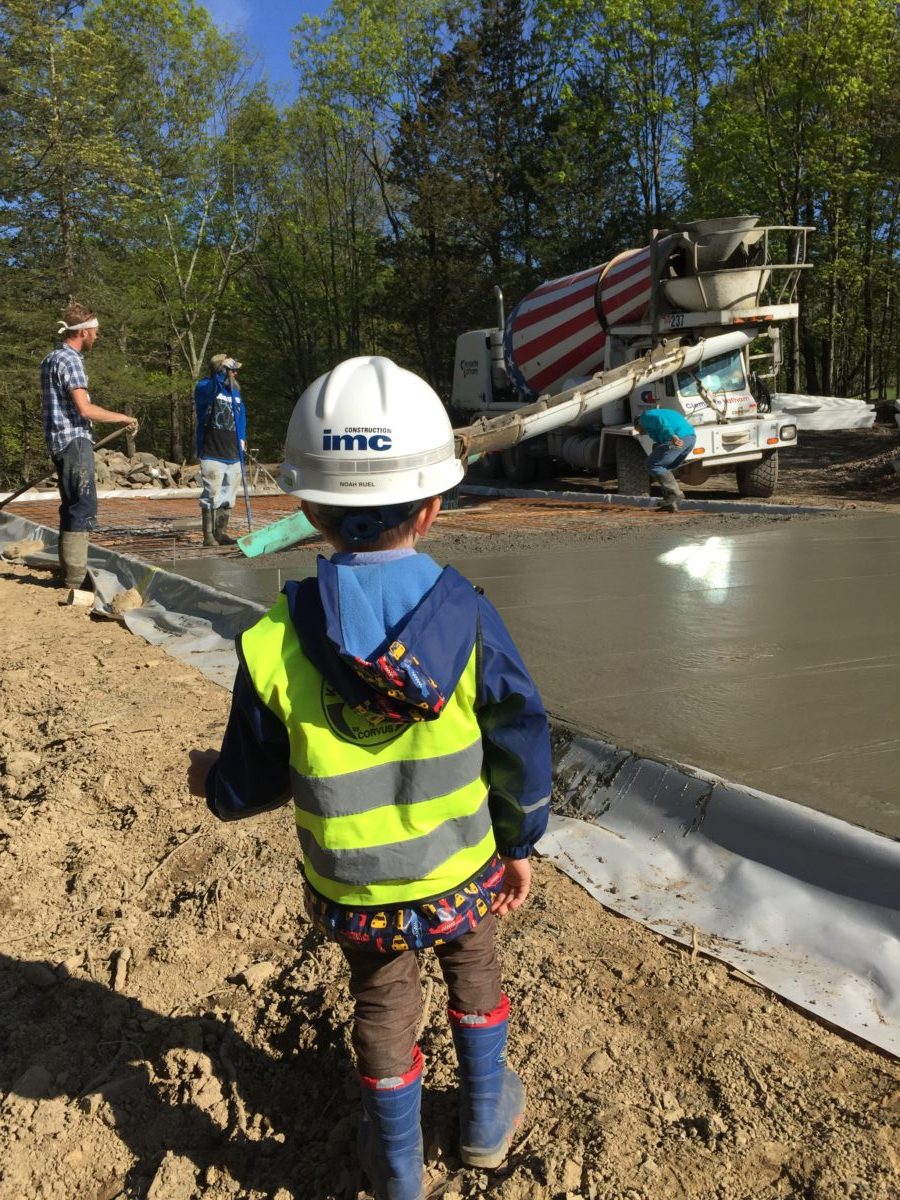 Greg and I are often asked to explain how “closed walls” are built in Sweden, often the focus on these questions is oriented around “automation”, and while it is true that automation is used to build wall elements in Sweden, the process is not dependant upon automation.

Here is a paper that lays out much many of the details:  Summary of Swedish Wall Element Construction 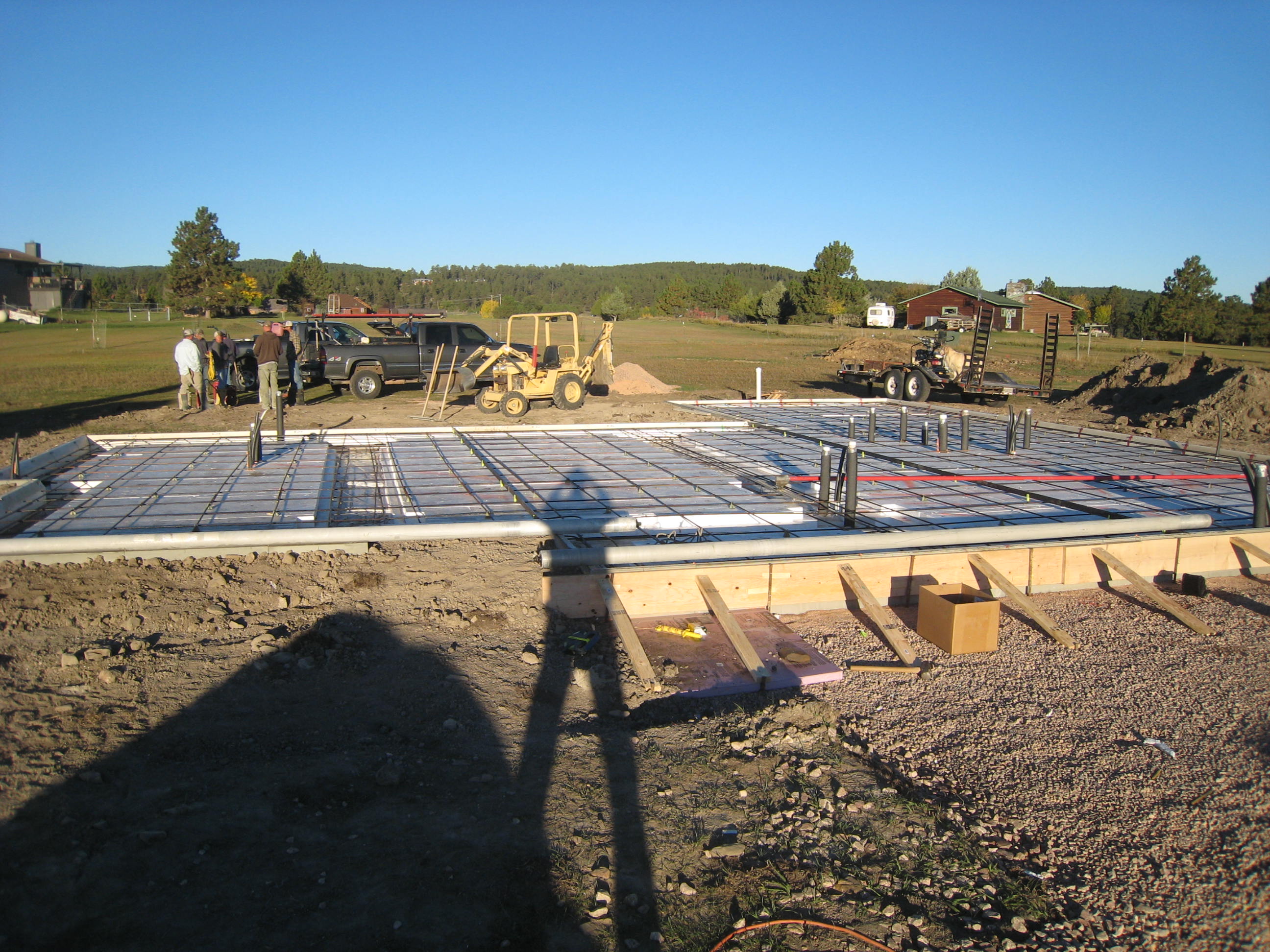 A new WarmFörm installation in South Dakota for a large ranch style home. Owner and concrete subcontractor laid out and installed themselves for a smooth and painless insulated slab on grade. Feedback – the concrete guy loved this!

Our first runs of WarmFörm elements featured a smooth parged cement face, but its always been our intention to implement a textured face as used by the best manufacturer’s in Sweden. We are ironing out the kinks in our new brushed cement face finish. The idea is that the vertical striated texture will blend better with the vertical joints between the elements for an overall better appearance.

Last week Phoenix Haus, took delivery of four, 9 meter wall framing tables from Randek.  The tables are the BS20 “workhorse” that is found throughout Scandinavia providing an ergonomic solution to support panelized wall panel production in a small shop setting.  The tables are not motorized, nor are they equipped with any automation, but they clamp, square and turn the walls hydraulically.

PhoenixHaus is focused on producing homes to the “passivhaus” standard – and is located in the center of Detroit, a city that is famous for a lot of things but most recently for having vast areas to rebuild and at least some of these houses will be built to the highest level of building performance, the “passive” standard.

The “butterfly table”, or  Vändbord in Swedish, was invented by Randek in 1963, and was designed to allow the wall to be turned or flipped so that work can be done on both sides.  Its an ingenious, typically Swedish bit of design that has been copied many times and is standard in European house factories.

Butterfly tables are not used in the US or Canada because producers here do not “turn” their walls during production.

Phoenix, has a closed panel product that will take advantage of the Randek table’s turning function. 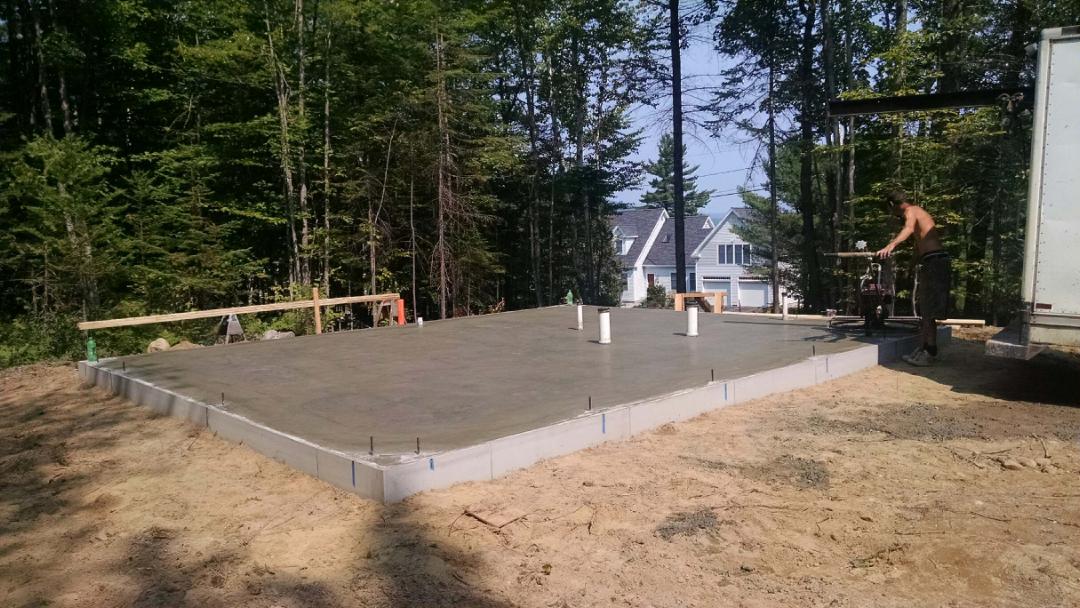 The second installation since the open offering of WarmFörm happened at the end of August, beginning of September in Maine. This is for a small vacation cabin on a small wooded site. The owner is a builder working for himself in this case.

More photos of this installation are here.

WarmFörm In (On) the Ground in WA

On the fourth of July holiday weekend I followed our WarmFörm order out to the construction site in Eastern Washington State to witness, advise, and photograph the installation.

Right now we are spending a non-trivial amount of time making sure our customers understand the configuration of their WarmFörm installation, and laying the ground work for successful installations. At the same time we are writing “The Book” on WarmFörm – the design manual and install instructions which will eventually replace all our hands-on insights.

Being a consultant type, normally I would fall on the side of personal consult trumps instruction booklets every time. But for WarmFörm its not so. The system is so simple, so straight forward, that a good description, a couple of examples, any competent builder will be able to quickly install a WarmFörm foundation. That was put to the test in Washington and proved so in spades.

The installation was done by the Owner Chuck, with some help from his son Ben, but the team was lead by the Owner’s brother Pete, a full-time home builder who was eager to work with WarmFörm. Pete took the bull by the horns, and applied his own experience with laying out and squaring foundations to leading the install of the WarmFörm. Final leveling and layout of the Edge Elements took the first day. Second day the first center layer of foam was laid, penetrations sealed, and the vapor/radon barrier installed. I headed home then, but the second and third layers of foam were completed on the third day. At that point the WarmFörm was ready for reinforcing and concrete. Remember, after that its done – no forms to strip, no slab edge to insulate and finish.

What is notable here is a three day install with a two man crew working with WarmFörm for the first time. Half a day of that three was spent on prepping the stone base, which with experience could have been completed in advance to the tolerances needed, preferably by the sub-contractor that laid the stone. We also spent a good half day squaring the forms as the layout strings got away from us during the layout. The strings were too low and interfered with the layout. Squared strings at the proper height would have avoided this and saved much of the effort here. So my observation is that with experience and foresight on the preparation this could have easily been done in two days.

Here in lies the promise of WarmFörm. Fast installs of a system that yields a superior product. A highly insulated slab on grade that does not require excavation below frost. The take away for future first-timers reading here: Level stone prep is your biggest goal and will pay off when you layout. And squared strings set at the top of the forms so you can layout square from the start is also a huge timesaver.

Bygghouse hopes these sorts of images will not be worth posting in the near future, but commercializing a building technology, and the growing pains of a building product manufacturing and sales operation in North America is a thankless task!

So we’re happy to see these out the door!

When they get to the building site – the fast layout, and prefinished facing on the stem wall will provide a perfect insulated slab foundation, replacing the need to stake and form the slab, insulate and finish the stem wall – WarmFörm does all these in one go.  Just order WarmFörm, level and compact the base, layout the perimeter, add rebar and hydronic tubing – down to millimeter accuracy and place concrete:  you’re done.

Why not build your next slab foundation with WarmFörm:  operators are standing by to take your calls! 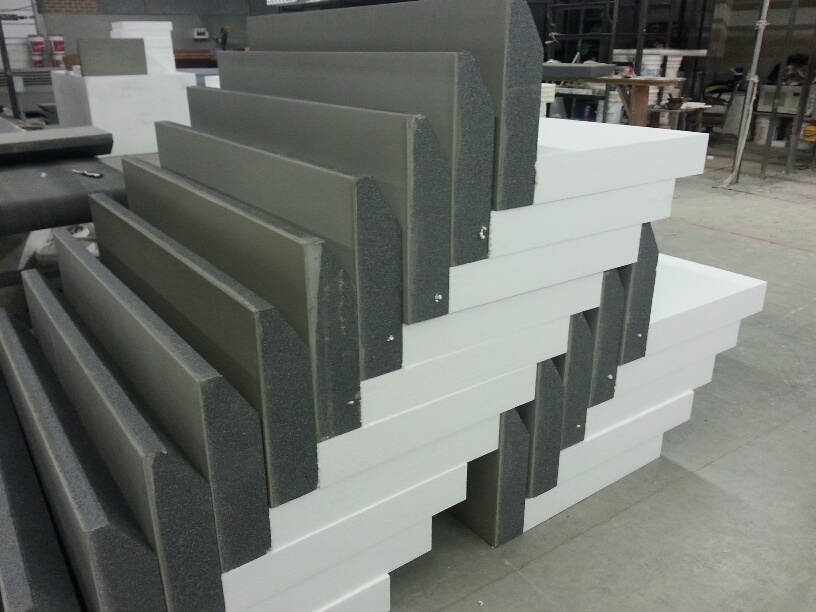 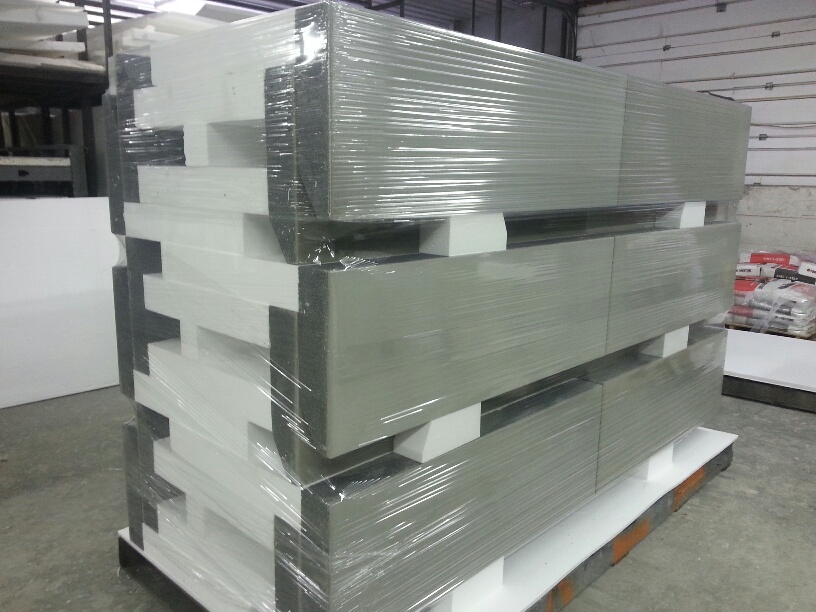 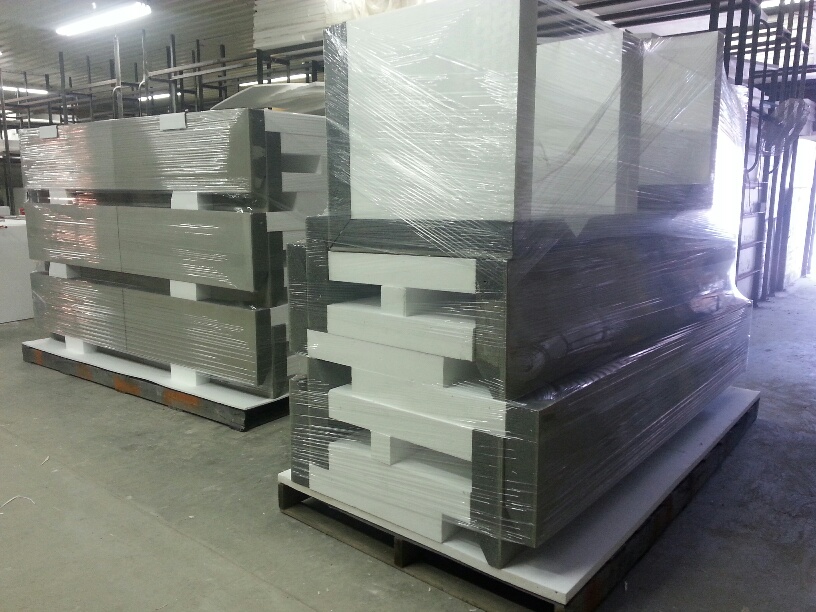 We’ve been busy here at Bygghouse arranging some travel to Sweden for several clients, and in doing this we’ve had an excuse to check over the never ending flow of interesting marketing and advertising work being done by the companies in Sweden that sell houses using the advanced building ideas that we think should have a home in North America.  Since we are focused on building technology, we tend to ignore the commercial context in which firms operate, when there is much of interest to say about a housing industry that sells houses more like – products.  In Sweden the term “kataloghus” is used to define the business which has grown up selling houses out of pattern books and catalogs.

The fact that firms in Sweden operate this way means that they are also in direct competition for customers, who can pick and choose among similar offers.

In Sweden there are dozens (perhaps close to one hundred) firms who are pretty much in direct competition for each other’s customers.  Most of the larger house firms have 20-30 sales offices and will build anywhere they can make a sale.  We have nothing like this kind of competitive marketplace – and definitely not this kind of competition in the marketplace for “average houses”.

This much competition has created a virtuous cycle where doing well leads to more sales, and where new ideas and styles are eagerly sought out – in hopes that these “new” things will drive sales.  In North America, builders generally control land in order to sell houses – but in Sweden, the customers go looking for houses to put on their land – and people who have houses to sell them have to do what all consumer products firms have to do:  convince the customer to choose them instead of the other guy.

So in general, what you see in Sweden, among firms who use advanced building technology to produce housing – is also a pretty high level of marketing savvy.

To get a feel for what this market looks like, Bygghouse presents the ultimate Swedish house advertising film:

This is of course in Swedish, so you’ll have to just work with the emotions, but briefly:

The commercial opens with a heavily pregnant woman driving her volvo with two kids in the back, in a snowy landscape. She is thinking of a house for her growing family. Then we cut to the image of a Swedish carpenter, driving in his Mercedes utility van. He’s headed to the workshop, where houses start out life on tables laid out flat as carefully detailed wall sections that are then shipped vertically on trucks and set with cranes.
The family is thinking about their house, their dreams, the carpenter is thinking how much he loves the work he does and the smell of fresh cut pine.
He works methodically and carefully, in a small shop, to build a house, piece by piece, and we see him at his computer, since the house is being built as parts, each wall section has a parts drawing and cut list. He and the pregnant woman are cosmically in contact though the fulfillment of dreams – a hawk calls over the frozen forest.
The house arrives and is set on the foundation by 4 guys using the delivery truck’s small crane, you can see the house parts all standing on the truck. Nothing is just dumped on the ground, the truck is part of the building process!
The family plays in the snow and shops at IKEA (where else?!) while they are putting the finishing touches on the house. The carpenter installs some prefinished trim.
He screws his company’s name plate to the door, and hands her the keys, he almost cries, but not quite.
The family stand next to their huge 3 pane view out looking over the lake and the kids jump on the sofa while the woman says: A house to live in, a house for us … then cut to the house in the dark as the northern lights dance overhead.
So now you’ve seen it, the perfect Swedish House commercial! 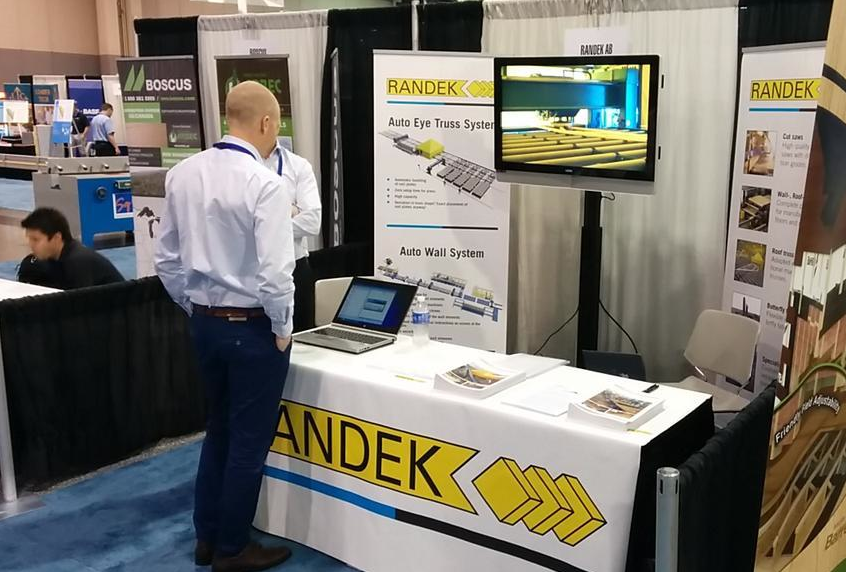 ByggHouse at the Building Component Manufacturer’s Conference 2014 with Randek AB, maker of tools for industrial production of houses.